What are the two forms of genetic drift and examples?

The two forms of genetic drift are the bottleneck effect and the founder effect.

Genetic drift is an unpredictable change in the gene pool, and it usually limits diversity because some alleles become either eliminated or expressed too much.

Two forms of genetic drift are the founder effect and the bottleneck effect.

When a small group of individuals breaks away from a larger population and creates its own population in a separate location, rare alleles could be overrepresated in this newly "founded" population. If this new population is isolated and interbreeds, then the resulting population could have a high frequency of certain traits.

Example: The Afrikaner (Dutch) population that settled in South Africa had an abnormally high count of Huntington's Disease, because the first Dutch settlers had a high frequency of the gene (compared to the original Dutch population). 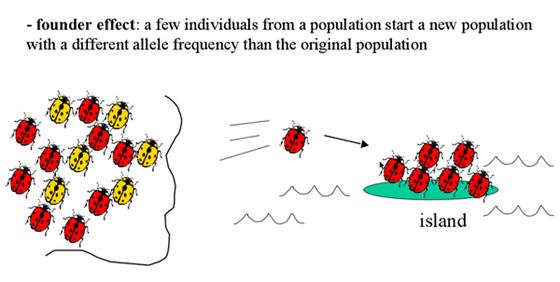 The bottleneck effect occurs when a random event, such as a natural disaster, unselectively reduces the size of a population. The resulting population is much less genetically diverse than the original population. Some alleles may become entirely eliminated and some may become overrepresented .

Example: After the northern elephant seal almost went extinct as a result of extensive hunting, the seal was placed under government protection. Since then, the population has grown, but all the descendants have little genetic variation since so few elephant seals remained. 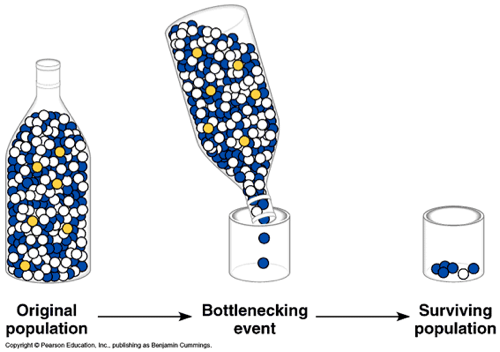