Keeping it as simple as possible.
A black hole has what is called its Schwarzschild radius. Everything inside of that radius is sucked into the black hole by gravity. Gravity still affects things outside that radius and that material goes into orbit around the black hole.

At the center of most (maybe all) large galaxies there is a supermassive black hole with a mass potentially of billions of times that of our sun. Such a huge black hole has gravitational effects a great distance. As such it can amass a lot of material in orbit around it. This material will form into an accretion disc. That disc can have billions of times the mass of our sun and as such can generate a lot of energy. This energy can be greater than the entire energy of normal galaxies.

So a quasar is a disc of material that can be as much as 4 trillion times brighter than our sun. 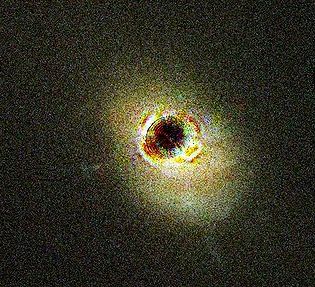 1200 views around the world