What fills space between galaxies? 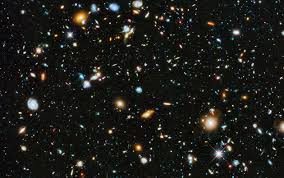 In between galaxies, it is mostly just empty space. And by empty, I don't mean the kind of empty in an empty jar but empty as in a vacuum - an area with no particles or atoms at all. However, there are a few "rogue stars". These lonely stars are not part of a larger body (galaxy), but sit on their own in space.

There is something else that fills space, but whether it counts as anything depends on what you class as something. I am, of course, talking about dark matter.
Physicists have found that there is not enough mass in the detectable universe to account for certain phenomena (e.g. there are galaxies that spin so fast that their observable mass couldn't possibly keep them together - there must be some mysterious form of mass that is contributing to it).

We don't really know anything about dark matter. It doesn't interact with the electromagnetic force, so we can't look at light or heat to discover more. Instead, we sort of just give it a label to account for it and sit rather puzzled.

It is worth mentioning this Dark Matter though, as it is thought to make up around 83% of the universe (or about 91% including dark energy).