What is one procedure, other than electrophoresis, that is used in the laboratory to separate the different types of molecules in a liquid mixture?

Given differential boiling points, certainly fractional distillation can separate, fractionate, the different components of a liquid mixture. When a refinery distils crude oil, it heats up the crude, and the more volatile material makes it farther up the tower than the involatile stuff, the tars and bitumen etc. 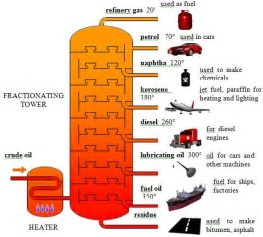 At the top of the column, the most volatile components come off, the hexanes, and the heptanes, ready to put in your motor. A fractionating tower in an oil-refinery may be 20-50 metres high, and they must really blast the bottom of the tower to get the distillate over. In the laboratory we use columns at most only 20-30 cm high, and the separating efficiency is impaired.

Given that the distillates are highly flammable, I imagine that safety considerations loom large in the minds of the engineers who conduct these operations.

1953 views around the world