What is the arrangement of atoms at the peak of an energy barrier?

It is the transition state, which is the very short-lived arrangement of atoms before any bonds have broken or formed yet.

It is the point that the reactants reach upon achieving enough energy to overcome the barrier to reactivity. 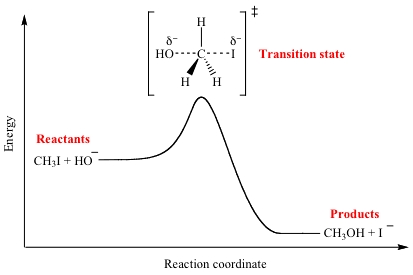 After it forms, the atoms transition to breaking or forming their bonds; old reactants are transformed into the new products in whichever way the mechanism works, and as they do that, we are looking at their going down the energy hill.

Usually, the transition state is hard to detect by non-advanced means because it is one of the highest-energy states a system of reactants achieves, if not the highest in energy.

655 views around the world