What is the charge on the polyatomic ions nitrite and chlorite?

Both have a charge of .

This leaves the nitrite ion with an overall charge of -1. 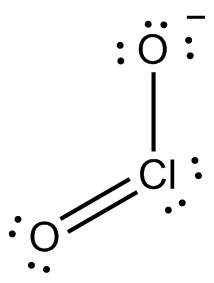 Another way to interpret the charge of -1 is that both ions have an extra electron, or one more than the molecules normally would have.