Formal charge is the charge we would assign to an atom in a molecule if we assume that the electrons in the bonds the atom makes are shared equally between itself and the other atom, regardless of the two atoms' electronegativities.

In order to determine the formal charges on all the atoms in , or vinyl chloride, draw its Lewis structure. 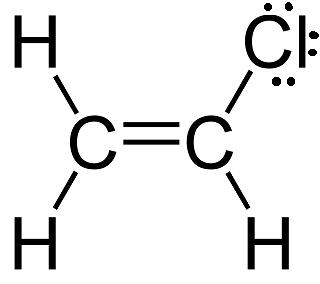 The easiest way to determine formal charge for an atom is to compare its valence electrons with the number of electrons it "gets" in a molecule.

Let's start with the carbon atoms, since they both form 4 bonds. The assumption made for determining formal charge is that the electrons in a bond are shared equally. This means that 4 bonds will give this carbon atom 4 electrons.

The same reasoning applies to each of the three hydrogen atoms as well. Each hydrogen atom form 1 bond, so it gets 1 electron from the two that form the bond. Since hydrogen has 1 valence electron, its formal charge will be zero.

Now for the chlorine atom. Chlorine has 7 valence electrons. As you can see in the Lewis structure, it has 6 electrons as lone pairs and gets 1 more electron from the bond it forms with carbon.

As a result, chlorine's formal charge will be zero as well.

See all questions in Formal Charge