What is the H-R diagram?

A Herzsprung-Russell Diagram is a way of trying to find a pattern of the known stars by organizing them by Luminosity and temperature.

The graph has attempted to graph the characteristics of stars using a linear function, originating from the Stefan-Boltzmann law of Blackbody radiation (as stars can be considered as black bodies- i.e an object that is a perfect absorber)

According to Stefan-Boltzmann's law of blackbody radiation:

Hence this equation can be split using logarithms:

So the linear equation in the HR diagram becomes:

Luminosity on a log-scale on the y-axis and the temperature on the x-axis, also in a log with base 10 scale.

The diagonals also denote the radius, the further up to the right you lie, the greater the radius of the stars.

A few notes to make:

Neutron stars are typically not shown on the HR diagram because they tend to cool off with time, losing their luminosity and temperature. However, if asked to place them on the HR diagram, they are close to white dwarfs.

Black holes are not shown because they do not produce their own light, and therefore is said to have no luminosity. 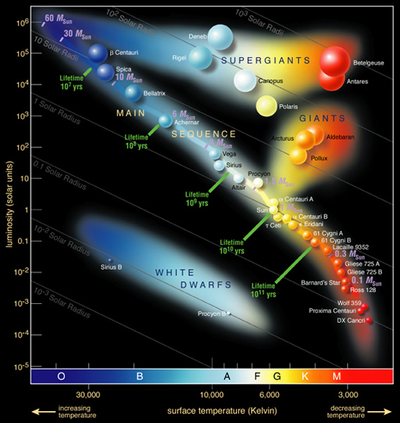 See all questions in The Hertzsprung-Russell Diagram

2843 views around the world