What is the molecular geometry of AsCl3 ? A) tetrahedral B) trigonal pyramidal C) trigonal planar D) T-shaped

The answer is B) trigonal pyramidal.

To determine the molecular geometry of arsenic trichloride, , you must take a look at its Lewis structure.

One arsenic trichloride molecule will have a total of 26 valence electrons - 5 from the arsenic atom and 7 from each of the three chlorine atoms.

The remaining two valence electrons will be place on the arsenic atom as a lone pair.

The arsenic atom is surrounded by 4 regions of electron density, which means that its has a steric number equal to 4. According to VSEPR Theory, the molecular geometry will be trigonal pyramidal, . 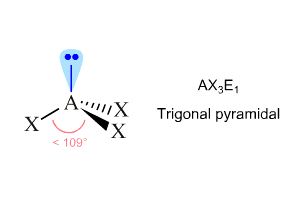 Here is a video which discusses VSEPR theory and the shapes of molecules.