What is the molecular geometry of BrF4- ? A) square planar B) square pyramidal C) seesaw D) tetrahedral

The answer is A) square planar.

Start from the Lewis structure of the tetrafluoroborate ion, . The molecule will have a total of 36 valence electrons - 7 from bromine, 7 from each of the four fluorine atoms, and one extra electron to give the ion the -1 charge. 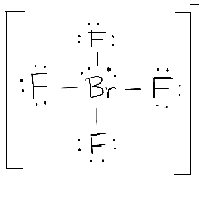 The remaining 4 valence electrons will be placed on bromine as lone pairs.

The bromine atom is surrounded by 6 regions of electron density - four single bonds and 2 lone pairs, which means that its steric number will be equal to 6.

According to VSEPR Theory, the molecular geometry will be square planar - .