What rock types are most common on the moon? 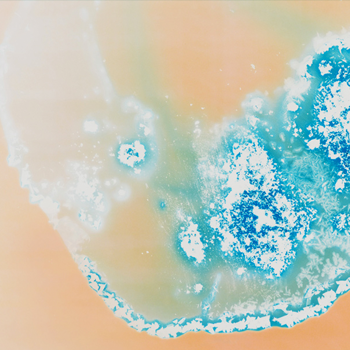 There are four types of rocks commonly found on the Moon: Basalt, Breccia, Highlands, and Regolith (or surface soil).

The rocks on the Moon are the result of impact events, or meteoric collisions, throughout the Moon's history.

Black volcanic basalts are found on 26% of the Moon's near side (and 2% of the Moon's far side). They formed when volcanic lava bubbled up into the Moon's cavernous basins through cracks formed by past meteoric impacts. Lunar basalts are similar to basalts found on Earth except for minor differences in chemical composition, such as fewer iron-like elements.

Breccia are composite rocks formed from jagged and irregularly-shaped fragments that melted and then fused together during a meteoric collision. They are commonly found surrounding the Moon's craters. The pervasiveness of breccia suggests how often impact events occurred throughout the Moon's history.

Anorthosite is found across the Moon's lunar highlands and likely formed the primitive lunar crust. These rocks can be 4.6 billion years old at most, and their chemical composition suggests that the Moon's surface experienced frequent melting.

Regolith is the loose, dusty soil that covers the Moon's surface up to a few meters on the Mare and sometimes triple that on the Highlands. It exists due to the Moon's constant bombardment with meteors - as the first line of defense, what might be larger rocks are ground into a powder upon these impacts.

The composition of the Regolith mirrors that of the rocks underneath, which means the soil is mostly basalt on the the Mare and largely Highland rock on the Highlands. Glass spherules (small glass beads \ formed from small impacts on the Moon's surface) and orange dust from volcanic eruptions can also be found in the Regolith.