What was the U.S. Policy of Imperialism in the early 1900's?

When the United States entered this new dawn, they were met with lots of opportunities. When it comes to the precedents, the U.S. war just emerging from the Spanish-American war, wherein the Americans made the Philippines a protectorate.

During this time, they also did annex Hawaii (they were reluctant before, when they sensed vulnerability as they were attacking the Philippines, fearing that say, Japan would take them, were annexed).

1900's: When Theodore Roosevelt comes into power, he is quintessentially recognized for his "Big Stick" diplomacy. "speak softly, and carry a big stick." -Theodore Roosevelt. What this meant, was that basically the U.S.A. would be meddling in other nation's affairs by arguing with things such as the Platt Amendment (the Monroe Doctrine being the predecessor to all of these justifications); with this one, the U.S. was able to "allow the United States to intervene unilaterally in Cuban affairs, and a pledge to lease land to the United States for naval bases on the island."

Then there's the famous Panamanian rebels, which Teddy helped by blockading Colombia from being able to deal with them (by using the Navy), which then allowed him to construct the Canal. 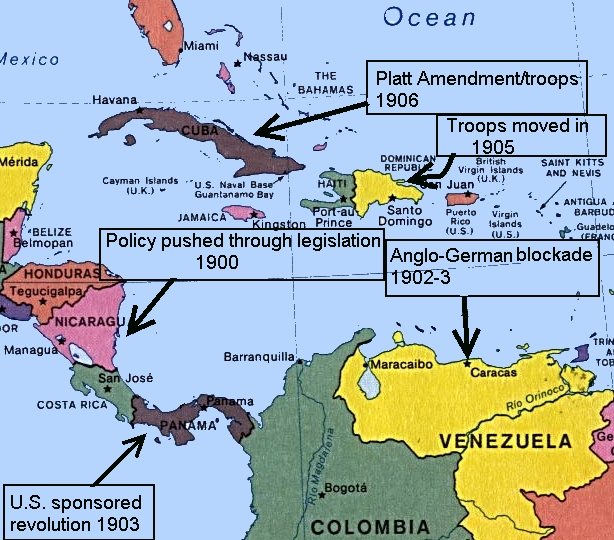 After Teddy's tenure was over, and Thomas Woodrow Wilson took command, it can be summed up like this : "Tell me what is right and I will fight for it.". Wilson saw Imperialism as something so unjust, and unfair, that he vehemently opposed it. Ironically, Wilson ended up also intervening in other affairs, such as by sending U.S. marines to Haiti (https://en.wikipedia.org/wiki/United_States_occupation_of_Haiti), making Haiti a protectorate of the United States. Also, since Wilson loathed Victoriano Huerta (Mexican Dictator), he took over the port of Veracruz (https://en.wikipedia.org/wiki/United_States_occupation_of_Veracruz), in order to prevent German munitions from arriving there. He also launched an expedition (The "Mexican Expedition") in retaliation for an attack Pancho Villa (Mexican Revolutionary), made on Columbus, New Mexico. (https://en.wikipedia.org/wiki/Pancho_Villa_Expedition)

He did however, sign an agreement, wherein the Philippines would be released once there was a "stable government" in the Pujo Committee. The nation would eventually gain their independence from the U.S.A. by 1946. Therefore, they began in an imperialist manner, slowly turned more towards Democratism. Woodrow also purchased the Virgin Islands from Denmark in 1917.

1088 views around the world