Where are the strongest winds in a tropical storm?

Near the center, at the “eyewall” in a typhoon or hurricane.

Hurricanes, cyclones and typhoons are all names for tropical storms. The impact is usually measured in terms of the highest velocity sustainable winds, which are different from the “strongest” winds at a particular location in the overall storm system.

Due to the centripetal forces involved in creating cyclonic storms, the highest wind velocities are in the eyewall, reducing in velocity as they move further away. 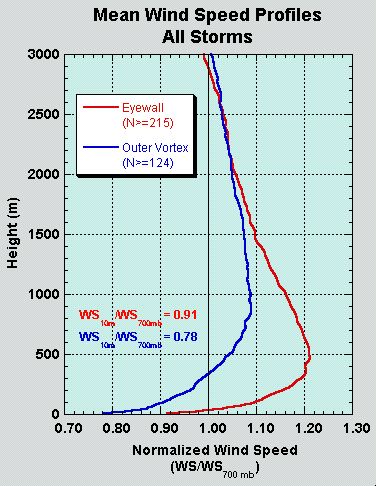 Atmospheric pressure and wind speed change across the diameter of a hurricane. To demonstrate, the diagram below shows a rough profile of wind speed (blue) and surface pressure (red) across a hurricane. Between 100 and 200 kilometers from the eye, the winds are fast enough to qualify as tropical storm force.

The atmospheric pressure here will still be relatively high compared to the storm's center at about 990 to 1010 millibars. However, the pressure gradually falls and the wind speed rises upon getting closer to the eye wall. It is only over the last 50 to 100 kilometers that the large changes in pressure and wind speed occur.

Upon exiting the eye, the wind speed and pressure both increase rapidly. The wind speed again reaches a maximum in the opposite eye wall, and then quickly begins to decrease.

The wind and pressure profiles inside a hurricane are roughly symmetrical, so a quick rise in winds and pressure through the eye wall followed by a slower increase in pressure and likewise decrease in wind speed would be expected.

2901 views around the world