Where was No Man's Land located?

In the context of World War I, it was located between the trenches of the opposing forces (particularly on the Western Front).

The No Man's Land, as the name implies, was the area where no man would want to be.

Trench warfare was an especially brutal way to wage war. The trenches themselves were nasty, often filled with fleas and rats, and provided little protection from artillery. When soldiers went "over the top", i.e. when they left the trenches to attack the enemy, they entered an even more dangerous realm: No Man's Land.

In this short expanse between the opposing armies' trenches, any number of horrible things could happen to you. You could, for example, get mowed down by enemy machine guns, or step on a landmine. You could get caught in the barbed wire littering the No Man's Land, from which it was very difficult to escape. And of course, you were at the mercy of enemy artillery. The near impossibility of reaching the enemy trench, due to all these dangers, caused World War I to drag on for years as no army could gain a significant advantage.

Essentially, being in No Man's Land was like being in a horror movie. The landscape, after months of being pounded with artillery, was filled with pits that became sort of mini-ponds after it rained. Under normal conditions, the constant barrage of artillery gave the area uneven bumps and valleys, making it very difficult to manoeuvre. Below are some pictures highlighting what the area looked like: 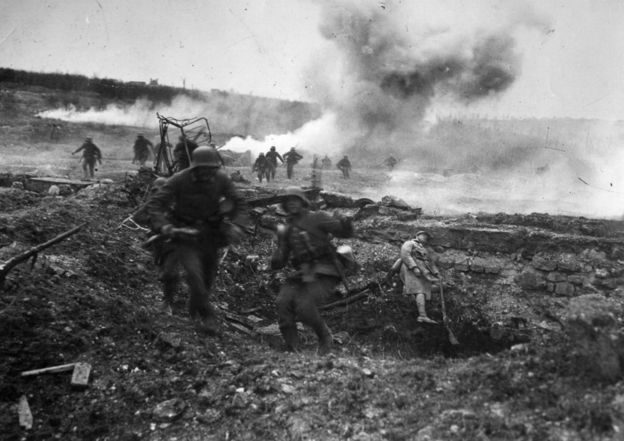 5357 views around the world