Which three main candidates ran in the 1948 Presidential election?

On the Democratic ticket, there was incumbent president Harry Truman, that took over after FDR had passed. On the Republican ticket was Thomas Dewey who was the 47th Governor of New York. Dewey had run as the Republican nominee against FDR in 1944 and lost. Then there was Strom Thurmond. The Democratic party was a crossroads of sorts at this point in history. Historically the Democratic party had been the party of the South. A lot of Democrats at this time started to modernize and support civil rights and that began to alienate white southerners (this would continue until LBJ and the passage of the Civil Right Act, when the South no longer became a Democratic stronghold and started to vote Republican) . Strom Thurmond created the Dixiecrat party in response to this modernization and mainly appealed to pro-segregationists.

The election results were quite a surprise. Most people though that since Truman had low approval ratings and along with the split in the Democratic party that he would lose. People become so sure of this that the Chicago Daily Tribune famously ran a paper before any polling places closed, announcing Dewey as the winner. Truman famously held up the blunder for all America to see. 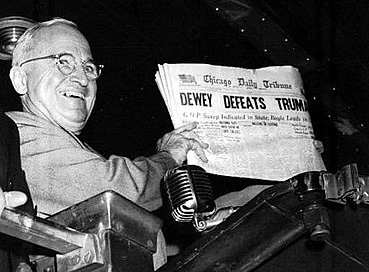 The final results were nothing like anybody expected. Truman won huge margins in the electoral college and won by over 2 million votes. Strom Thurmond won a few southern states and only got a little over 1 million votes.

1572 views around the world