Why are alkynes less reactive than alkenes in electrophilic addition reactions?

Let's consider a comparison between the two transition states (alkene vs. alkyne) of a typical electrophilic addition reaction. When you do these, one way to catalyze them is with an acid, so let's look at the first few steps of the acid-catalyzed hydration of an alkene vs. an alkyne: 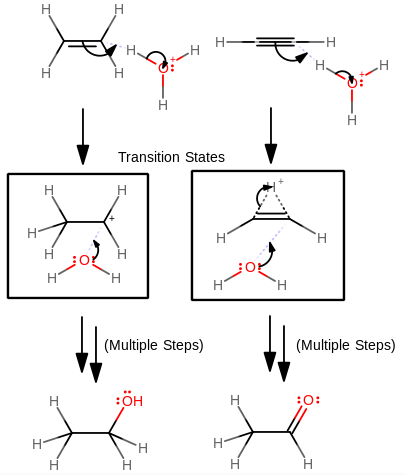 You can see that for the transition state of the alkyne, the hydrogen is not entirely bonded; it is "complexing" with the double bond, forming a complex; "idle", until something breaks the interaction (the nucleophilic attack of the water) to get the molecule out of its unstable state.

The complex is shaped like a cyclopropane analog, which is highly strained. Also, the high electron density in the double bond makes for some immensely disruptive repulsions that destabilize the transition state.

This combination of a highly-strained ring structure and high electron density in the intermediate (transition state) makes alkynes less reactive than alkenes in electrophilic addition reactions. Pictorially, the energy of the transition state is higher on the reaction coordinate diagram. 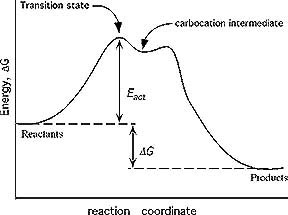