Why were lower castes more likely to convert to Buddhism?

Buddhism doesn't include a caste system - it teaches equality and that everyone is capable of reaching nirvana through personal improvement. previous religions - specifically Hinduism - had operated on a caste system (which is thought to be derived from splitting Purusa - the first man - although sources vary). 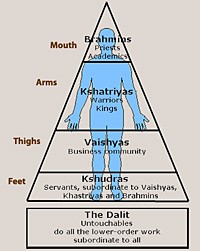 The lowest cast, the Kshudras, did all the labour jobs and were used for servants. They were destined to live their lives as subordinates. Even worse was the life of Dalits, deemed untouchable and forced to live a life of poverty and hard, low-order work. They were subordinate to all.

By converting to Buddhism, members of the lower caste could escape the discrimination they have suffered under the caste system and be treated as equals by other Buddhists.

6524 views around the world