What enzymes are in the digestive system and what do those enzymes do?

The digestive system and enzymes is one of the most complex concepts there is. Here is a diagram so you can follow along with the location of the enzymes. If you print this, you can then label it. 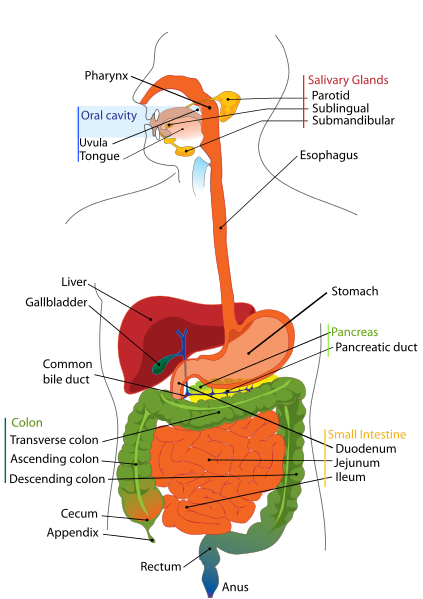 The Oral Cavity has limited digestion of carbohydrates and lipids (amylase and lipase).

The Tongue is involved in secretion of mucins and the enzyme lingual lipase (breaks down some fats).

The primary function of the esophagus is to convey solid food and liquids to the stomach.

Parietal cells in the stomach secrete hydrochloric acid (HCl) which break bonds between compounds. Other cells produce intrinsic factor, a glycoprotein whose presence in the digestive tract is required for the absorption of vitamin B12in the small intestine.

Chief cells in the stomach secrete pepsinogen which is converted by the acid in the gastric lumen to pepsin, an enzyme that breaks down proteins.

The pylorus is a part of the stomach that produces gastrin. The pyloric glands also contain D cells, which release somatostatin, a hormone that inhibits the release of gastrin.

The mucosa of the small intestine produces only a few enzymes. Intestinal glands also contain enteroendocrine cells responsible for the production of several intestinal hormones, including gastrin, cholecystokinin, and secretin.

The liver is responsible for bile production, a solution stored in the gallbladder for subsequent discharge into the small intestine.
Bile contains buffers and bile salts, compounds that facilitate the digestion and absorption of lipids.