I assume you're referring to cyclic ozone, which has a Lewis structure that looks like this 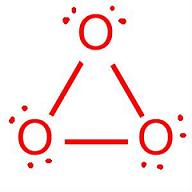 Well, I can think of two main reasons for why ozone's molecular stucture cannot be described like that.

The first one is stability, of course. I won't go into too much detail, but, if you look at the Lewis structure drawn above, you'll notice that all three oxygen atoms are hybridized.

This means that the ideal bond angle for a structure that has 2 lone pairs is roughly . However, a 3-member ring forces the atoms to make angles, which induces significant ring strain (every type of strain, actually), drastically affecting stability.

This is very similar to what happens for cyclopropane, or .

This brings me to the second reason for why cyclic ozone is not the actual structure for the ozone molecule. In one word, polarity.

We know for a fact that ozone is a polar molecule. This automatically implies the existance of a permanent dipole, which in turn is formed by formal charges.

Notice that such formal charges exist on the two Lewis structures above (the ones labeled "more important"), but do not exist on the cyclic ozone.

In a cyclic structure, ozone would be a nonpolar molecule.

Attempts have been made at producing cyclic ozone, check out this link for more info on that:

2321 views around the world