The strength of attraction between the valence electrons and the nucleus of an atom increases as you move from left to right across a period.

This happens because, as you move from left to right across a period, the atomic number increases and the electrons are being added to the same energy level, i.e at the same distance from the nucleus.

This is referred to as effective nuclear charge - the number of protons increases, which means that the electrons feel more pull from the nucleus.

This is what causes the decrease in atomic size to take place.

This can explain in part explain the increase in melting point from sodium to aluminium. Sodium, magnesium, and aluminium all have metallic bonding, which implies cations attracted by delocalized electrons that form the famous sea of electrons model.

Sodiu, for example, loses 1 electron to form the cation. This means that each sodium atom donates 1 electron to the structure. On the other hand, magnesium loses 2 electrons to form cation.

Likewise, aluminium can lose three electrons to form the cation. Its melting point will be higher than those of sodium and magnesium because of, you guessed it, stronger attraction between the positively charged cations and the negatively charged sea of electrons. 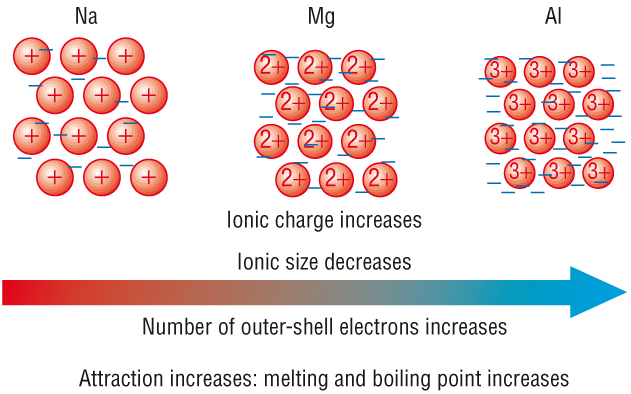 See all questions in Metallic Compounds

4608 views around the world