The melting point of argon is much lower than those of period 3 elements because, being a noble gas, it exists as atoms, rather than molecules, which directly impacts the strength of its intermolecular forces of attraction.

Melting point temperatures are determined by the strength of the intermolecular forces and by the characteristics of the structure of the elements. 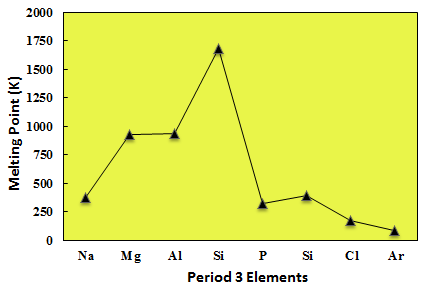 Melting point temperatures increase starting with the first three elements in the period - these elements form metallic structures, they peak at silicon, which forms a giant covalent lattice, i.e. a network of covalent bonds, then drop significantly when you get to the nonmetals.

These compounds do not form structures, but rather exist as independent molecules (or atoms, in argon's case).

These molecules only exhibit weak van der Waals interactions, or London dispersion forces (LDF), which means that much less energy is needed to melt or boil them.

The size of the molecule plays an important role in determining the strength of the LDFs - the bigger the molecule, the stronger these forces will be.

Since argon exists as single atoms, the LDFs will be extremely weak, hence the very low melting and boiling points it has.

So, argon only exists as individual atoms in exhibits very weak intermolecular forces of attraction it has a very low melting point.

See all questions in Chemical and Physical Properties

4466 views around the world