I assume you mean when compared with water.

Indeed, a stream of ethanol is deflected slightly less than a stream of water because ethanol has a smaller net dipole moment than water. 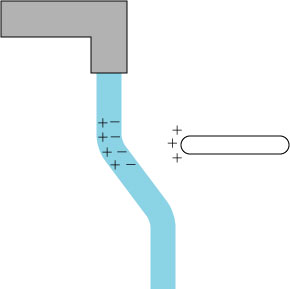 The partial negative part of the ethanol molecule, i.e. the oxygen from the group, will be attracted to the positively charged particles in the rod, causing the stream to be deflected.

However, because ethanol has a smaller dipole moment than water - approximately 1.68-1.69 D, compared with 1.85-1.87 D for water, this deflection will not be as significant as the deflection of a water stream.

6418 views around the world