The histidine participates in the catalysis by way of acid-base proton transfers called a charge relay system.

We can eliminate the metal ion option, because histidine contains no metal. 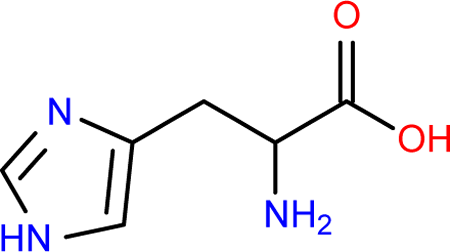 The histidine participates in a number of H-bonding interactions, but that is not one of the options.

After the target enters the active site, the O atom in the OH group on serine performs a nucleophilic attack on the carbonyl carbon of a peptide, forming a tetrahedral oxyanion intermediate.

The histidine acts as a base and accepts the proton from the OH group of serine.

The oxyanion re-forms the carbonyl group and the amide bond is cleaved to form an acyl-enzyme intermediate.

The newly-formed N-terminus takes back the proton from the protonated histidine.

Water molecules now enter and hydrogen bond with the histidine.

The water now makes a nucleophilic attack on the carbonyl carbon of the acyl-enzyme intermediate and forms another oxyanion.

The histidine accepts a proton from the water and forms a hydrogen bond to the serine.

The serine oxygen deprotonates the histidine nitrogen and re-forms the original enzyme.