You write soluble ionic compounds as cation and anion.

In your case, barium nitrate, , is composed of barium cations, , and nitrate anions, , which means that, in aqueous solution, you would write it like this

The 2 stoichiometric coefficient comes from the fact that you need two nitrate anions to balance the charge of the barium cation.

So, always try to identify the cation and anion first, and figure out the stoichiometric coefficients by looking at the charges.

Keep in mind that ionic compounds follow the cross-over rule. Here's an example of how that works with calcium nitrate, which is very similar to barium nitrate in terms of cation and anion charges 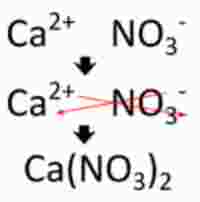 1069 views around the world