Think of the formula unit as an "ionic molecule".

Since the cations and anions are stuck together in this giant structure, you can't say that you're dealing with molecules.

Instead you get formula units. A formula unit is the smallest whole number ratio that exists between the cations and anions that form an ionic compound.

For example, sodium chloride, , is formed when sodium cations, , are ionically bonded to chloride anions, .

As you can see, the ions are distributed in a ratio, with each sodium cation being surrounded on all sides by chloride anions and vice versa.

This means that the formula unit of sodium chloride, i.e. the empirical formula that best describes this ionic compound, is . 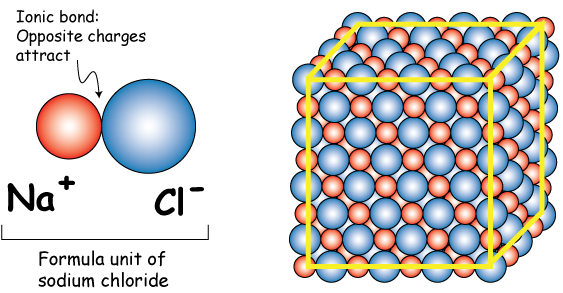 So, as a conclusion, you can think of the formula unit as being for ionic compounds (and for compounds that form covalent networks) what a molecule is for covalent compounds.