How does iron react with oxygen?

Iron can react with oxygen to form two of its oxides, iron (II, III) oxide and iron (III) oxide.

The balanced chemical equations for these reactions look like this 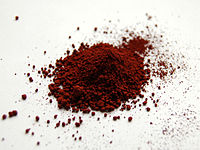 Here's a video showing the burning of iron in oxygen

SIDE NOTE You will sometimes hear dry Iron (III) oxide powder being referred to as rust, but that is the simplified version of what rust really is, which is a combination of hydrated iron (III) oxide and iron (III) hydroxides.

9123 views around the world