Here's what I found.

The fullerenes are a family of buckyballs of various sizes.

The most well-known fullerene is (buckminsterfullerene).

Other known fullerenes are , and .

is a black solid.

It is as soft as graphite but, when compressed to less than 70% of its volume, it transforms into a super-hard form of diamond.

The fullerenes are the only form of carbon that is soluble in some common solvents.

They are insoluble in water but soluble in organic solvents like benzene, toluene, chloroform, and carbon disulfide.

Solutions of in toluene have a magenta colour.

Here are the colours of some other fullerenes in solution:

One of the problems in studying the fullerenes is obtaining them in sufficient quantity.

However, most of those studied have a face-centred cubic structure. 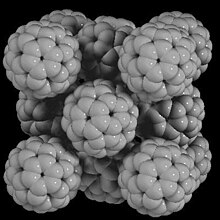 The crystals tend to be relatively soft because the balls are attracted to each other only by weak van der Waals forces.

574 views around the world