The most important thing to remember about reactions that take place in multiple steps is that the slowest step is the rate-determining step.

In your case, the overall reaction

is said to proceed by the following mechanism

As you can see, adding these two steps will result in the overall reaction. Note that is formed by the first step and consumed in the second step, so it will be a reaction intermediate.

Now, the rate-determining step will be the step with the highest activation energy. A general-form potential energy diagram for a reaction that proceeds in two steps, with the first step being the slow step, looks like this 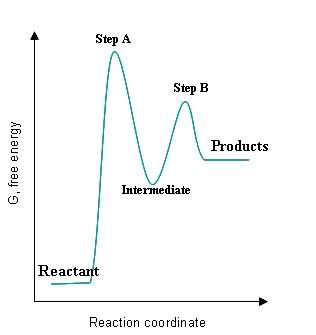 As you an see, the slow step will have the higher activation energy barrier.

So, the first step in your reaction mechanism is the slow one. In essence, the rate of the reaction will depend on a successful collision between two molecules of .

This is why the slow step is the rate-determining step.

So, the rate law for the slow step will look like this

- the rate constant of the first step

The rate of the reaction will thus depend on the square of the concentration of reactant .

See all questions in Rate Law

541 views around the world