Why do we use disodium EDTA?

Because generally, we don't need all six teeth to bind to a given target in practice, and because EDTA by itself is poorly soluble in water. Disodium EDTA is water-soluble.

EDTA, or ethylenediamminetetraaceticacid, a hexadentate, chelating ligand, looks like this: 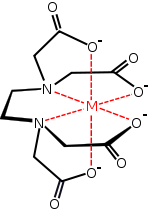 So you can see that four "teeth" on EDTA belong to the acetate oxygens, and two of them belong to tertiary amine nitrogens. EDTA has a high complexation formation constant, which means the equilibrium is highly in favor of EDTA binding.

However, EDTA by itself is NOT very water-soluble.

In disodium EDTA, or for short, the two nitrogens are protonated because their pKas ( for ammonia) are higher than the pKa of acetic acid (), and thus, they are more easily protonated. In the meantime, the sodium is just an alkali metal counterion, which promotes solubility in water.

This makes a water-soluble tetradentate (the two sodiums don't interfere with the binding capabilities of EDTA), not to mention, it works nicely under more typical pH's, i.e. .

In practice, it is generally more useful and convenient to have EDTA partially ionized as disodium EDTA since it is easier to dissolve in water for a complexometric experiment.

See all questions in Quantitative and Qualitative

2576 views around the world