As you know, atomic size increases as move move down a group of the periodic table. 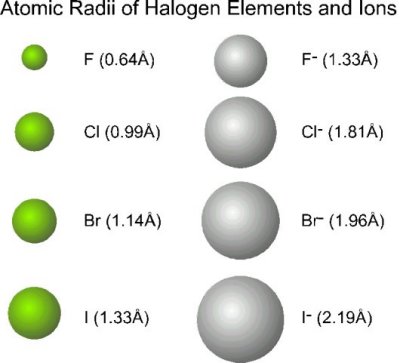 Simply put, fluorine atoms will occupy less space than iodine atoms, which are considerably bulky when compared with fluorine atoms.

Because iodine atoms are so massive when compared with fluorine atoms, you simply cannot bring five of these atoms together in such a small space, since that would result in a very powerful repulsion between their electron clouds.

This unfavorable overlapping between the electrons clouds will come at a very steep energy cost.

The interactions that exist between the electron clouds of various atoms that are a part of a molecule fall under the category of steric effects.

On the other hand, placing the larger iodine atom as the central atom will allow the smaller fluorine atoms to bond without too much repulsion.

The fluorine atoms are small enough and the central atom is large enough so that their electron clouds do not interact with each other in a way that would be energetically unfavorable.

This is why iodine pentafluoride, , ca be formed, but fluorine pentaiodide, , cannot.

1602 views around the world