The interesting thing about arsenic is that it is considered to be a monoisotopic element, which is a term used to describe an element that has only one stable isotope.

To get the identity of this stable isotope, pull up a periodic table and look for arsenic, . You will find it located in period 4, group 15. 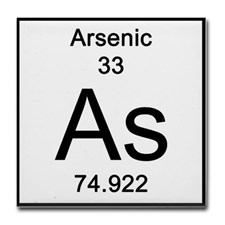 The number written below the chemical symbol represents the element's average atomic mass. For elements that have more than one isotope, this number tells you the weighted average of the atomic masses of its stable isotopes.

But since arsenic is monoisotopic, that number will tell you directly the atomic mass of its isotope.

This means that arsenic's stable isotope has an atomic mass of . To get its mass number, you need to round its atomic mass to the nearest whole number.

In this case, you have

Therefore, the stable arsenic isotope is arsenic-75, , which has protons and neutrons in its nucleus.

4983 views around the world