It has ionic and covalent bonds, but is classed as an ionic molecule.

Calcium carbonate has both ionic and covalent bonds.

Think about it in parts. Calcium carbonate is made of carbonate and calcium.

Carbonate is a compound of carbon and oxygen, both non-metals, so are covalently bonded. The carbon has one double bond and two single bonds. But oxygen needs two bonds, so the two atoms with only one bond are now negative ions.

Calcium forms a ion. Since there are two ions, the one two-positive and the two one-negative charges attract and cancel each other, leaving a molecule that looks like this 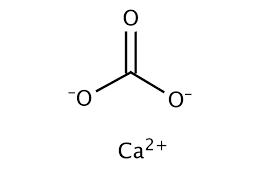 The joining of the lines in the middle is assumed to be a carbon atom, though it is not made clear. This format is known as a skeletal formula, ideal for quickly drawing organic carbon-based molecules.

Even though it has both types of bonds, is classed as ionic, as covalent molecules are meant to have no ionic bonds at all.