You could imagine it like a see-saw scale that has a fulcrum you can move around. This "moving around" is automatic to re-establish equilibrium. 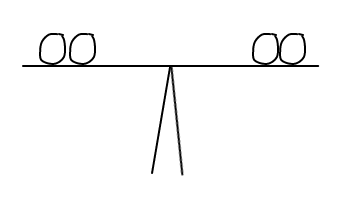 This is an equilibrium, specifically a dynamic equilibrium, where the reactants and products have a collective reaction rate that balances out in the forward and reverse directions.

In other words, the rate of the forward and reverse reactions are identical.

Now, it's not saying that the reactants and products aren't moving, but for the sake of the analogy, let's just assume that they are not moving.

What would happen if you added more products? You should expect a shift towards the reactants because the equilibrium should shift towards the side with a smaller concentration of molecules, according to Le Chatelier's principle. 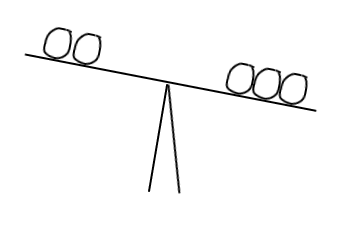 at which point, the fulcrum shifts automatically to the right to rebalance the center of mass of the see-saw, causing the see-saw to rotate counterclockwise.

In this depiction, the rotational momentum of the see-saw pushes the product over to the reactants side (the torque on the left side is greater since the lever arm distance is now longer, for you physics people). 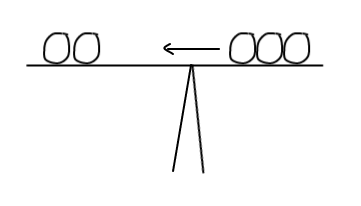 And now you've achieved a new dynamic equilibrium that is in a different position than before, like it should be.

Now, it's not as if a reaction literally shifted in its actual "center of mass" and pushes something over to the other spatial side of a room or anything like that, but I think it's a nice mental picture that illustrates the shift in equilibrium.

Overall, it's really based on a shift from a higher concentration to a lower concentration; the more product you add to an equilibrium, the more the product wants to un-form into some reactants again, and vice versa.

2351 views around the world