I think there is.

You've said it, the photon. All bodies at any temperature emit electromagnetic radiation also known as photons, the particle component of light.

Cool objects emit mainly long wavelengths of electromagnetic radiation. Heat them up and the peak wavelength shifts towards the shorter end of the spectrum.

For example; a block of iron emits infrared at low temperatures. Heat it up and it becomes red, the low end of visible light spectrum. Further heating makes it turn orange and eventually blue. If we can heat it even more without melting, we may see the iron block as its regular self because the peak wavelength has shifted even more to the ultraviolet spectrum. 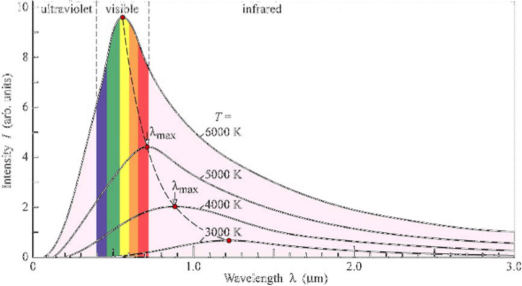 From the graph, the highest temperature is and the peak has the shortest wavelength.

The graph with the longest wavelength is , the lowest temperature in the graph.

Notice that all these graphs cover a great deal of electromagnetic spectrum.

In short, the hotter the object, the shorter the wavelength of the light emitted.

595 views around the world