Why is graphite a good conductor?

Graphite has a lot of resonance structures, which allows the electrons to 'move' through the layer.

The structure of graphite is shown below. Here the carbon atoms are displayed on each end of a line, but not with a dot. (The bigger black lines only try to show us that the structure is drawn in 3D). We see in the image 3 different layers that are aligned on top of each other.

The carbon atoms of graphite form 4 bonds with 3 nearby (surrounding) carbon atoms. Therefore, one of the bonds must be a double bond. 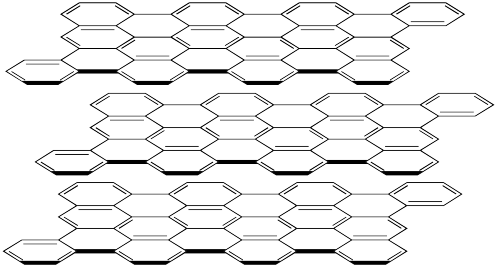 What do these double bonds have to do with the conductivity of the material?

The double bonds in the rings of graphite aren't set at a certain location on the layers. They can "move" across the molecule in a phenomenon called electron delocalization.

Double bonds consist of electrons, which in graphite can move through the layer.

Now imagine that you put an energy source over the graphite. At one side you put electrons in the molecule and at the other side, you subtract the electrons from graphite.

These electrons can move through the layer to the other side of the layer and back into the energy source creating a closed energy cycle! I tried to draw this process in the picture below to clarify. And as you may have guessed: This process cannot happen inside (pure) diamond (which is also made of carbon)! No electron pushing trough the molecule and no electrical conductivity.

3419 views around the world