OK, we need to explain some nuclear theory and appreciate that we are looking at probabilities more than “facts”.

Firstly, the nuclei of atoms are increasingly (and rapidly more) stable up to a mass number, as the strong force binds them much more than the electrostatic force pushes them apart. Beyond this there is a very gradual lowering in stability as the strong force has a definite maximum range (fm) whereas the electromagnetic force does not, it merely decreases in intensity with .

Secondly, the particle is an exceptionally stable configuration of nucleons as it represents the first (lowest energy) shell within the nucleus being completely filled. This makes it a statistically likely emission product. Some nuclei are much more likely to emit one kind of radiation than another, why? It depends upon their relative proportions of protons and neutrons, to attain stability nuclei need relatively more neutrons as the mass number increases. This means if we plot the number of neutrons against the number of protons in stable nuclei the line curve upwards.

This is shown graphically here : 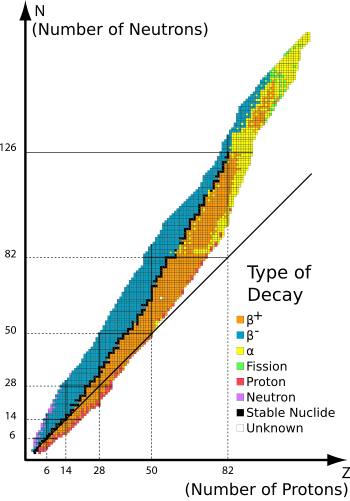 This diagram also shows the fact that whilst decays are almost always high mass particles, decays sit above the line of stability, whereas decays lie below it due to their relative proportions of neutrons (decaying to produce a , an anti-neutrino and a proton) and protons (which tend to do the reverse.)

363 views around the world