Does gravity have a long range? 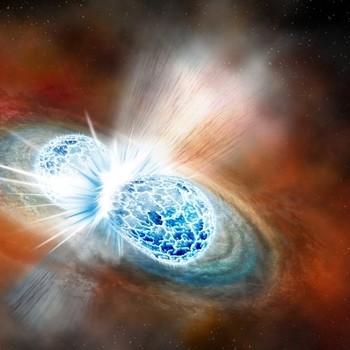 The bodies of terrestrial, astronomical and cosmological scale are pretty BIG.

Even as human beings, we are exerting gravitational force between each other, but our mass is so small it is insignificant.

In contrary, at the subatomic level, the weak and strong nuclear forces are very strong.

Gravity has a long range when large masses are involved.

The strong and weak nuclear forces are very short ranged. They operate at quark level and have no effect beyond adjacent nucleons in an atomic nucleus.

The electromagnetic force has an infinite range. It is also very strong. The force between two charges and a distance apart is:

Where the Coulomb constant

The Coulomb constant is huge, but for the electromagnetic force to be effective at astronomical distances enormous electrical charges would be required. These don't exist in nature.

Gravity also has infinite range. It is also relativity weak because the gravitational constant is very small. Gravity is effective at astronomical distances because the masses involved are huge.

Planets, stars and galaxies have large masses. Newton's equation for the attraction of two masses a distance of apart is:

Gravity is not actually a force. It is a consequence of spacetime being curved by mass. It is hard to curve spacetime. However, masses on an astronomical scale can do this.

1181 views around the world