Begin by drawing a force diagram, then use this diagram to construct statements for the net force.

I will assume a frictionless surface. This means that the forces acting on the object include the normal force, the force of gravity, and the pushing force. We can draw a diagram: 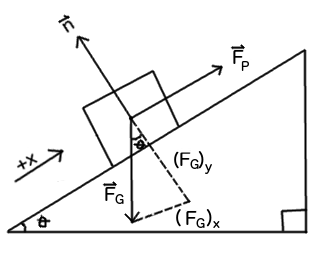 where is the normal force, is the pushing force, and is the force of gravity. Note that I have defined up the ramp as the positive direction. This is how we will decide whether the forces are positive or negative later. I'll drop vector arrows from now on.

Because the object is not accelerating vertically (not moving up or down), we know that . Therefore, there is no net force perpendicular and we can focus on the parallel (x) forces.

While both the normal force and pushing force are completely perpendicular and parallel (respectively), the force of gravity will have to be broken up into both its parallel and perpendicular components. We can do this using basic trigonometry.

We see, for the inner triangle, that . Rearranging to solve for the parallel component of the force of gravity, we get . So, we have:

Using that and , we have

663 views around the world