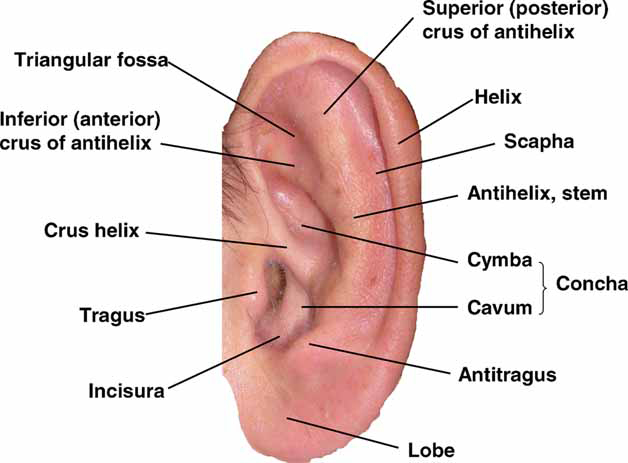 The pinna consists of the auricular cartilage, and skin which allows for flexibility and elasticity. The auricular cartilage is flared distally into a flattened cone shape, covered by skin on both sides - more tightly on the medial or concave side than the convex side.

The auricular cartilage is rolled into a funnel shape, known as the concha. The scutiform cartilage lies rostromedially in the lower ear canal and provides support.

The annular cartilage lies between the proximal horizontal ear canal and the bony acoustic process of the tympanic bulla, connected by ligaments.

The vertical ear canal lies in a rostroventral orientation before bending medially to become the horizontal canal.

The cartilage and bony process of the external ear and the tympanic membrane are covered by skin.

The skin of the normal ear has a thin stratified keratinising epidermis and a thin dermis containing adnexal structures– **hair follicles, sebaceous, apocrine glands and some not very much important nerves too.

7381 views around the world