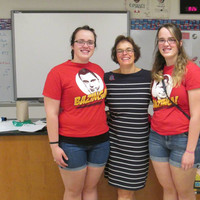 Physical changes don't destroy your sample or make it into something new.

During a physical change the elements and compounds stay as they are.

Chemical changes make new substances. Cooking an egg rearranges it's proteins. Burning fuels, etching metal with an acid, fermentation, respiration in your cells, decomposition in the compost pile, making zinc iodide in the lab, and forming a silver mirror are all chemical changes.

During a chemical change the elements and compounds get rearranged and recombined into something new.

Chemical change is characterized by the formation of new substances, and the making and breaking of chemical bonds. Physical changes are largely changes of state.

There seems to be a lot of confusion in the classification of physical versus chemical change, and you will see a lot of differing answers on Socratic when a student asks is this particular reaction a physical or chemical reaction. So at the risk of starting a long, protracted argument, I'll give you my definitions, and try to supply examples of each.

Chemical change is characterized by the formation of new substances and the making and breaking of strong chemical bonds. For (i) it is easy to see which bonds are broken and which bonds are formed:

We could also write the equation in this form to show how energy transfers in the reaction:

Condensation of steam is thus recognized as an exothermic process, or alternatively, vaporization of water is an endothermic process. The designation of this reaction as a physical change is quite unambiguous.

The issue becomes much more ambiguous when we consider dissolution reactions. Consider reactions (ii) and (iii):

As regards reaction (ii), we know that methanol is infinitely miscible with water (in fact if you rigorously dry methanol and then expose it to the air on a humid day, you can actually see the volume of the methanol expand as it absorbs air-borne moisture); nevertheless, this reaction is certainly physical inasmuch as no new bonds are formed (except for the very weak dispersion forces between methanol and water).

It is tempting to also designate (iii), the dissolution of salt in water, as a physical change. Many chemists would in fact do so. Inorganic chemists, however, would routinely designate this reaction as an example of chemical change. Why?

The reaction is very slightly endothermic (we'll come to why in a minute), nevertheless it is clear that (iii) is certainly a bond-breaking reaction, in which very strong electrostatic forces between and ions have been disrupted.

But what do we mean by ? This is in fact the aquated sodium ion, which we could represent as, , that is a sodium ion coordinated to 6 water molecules, what an inorganic chemist would call a complex ion. The interaction between the water molecule, and the sodium ion is an ion-dipole interaction, which are hardly as strong as ion-ion interactions. Nevertheless, because there are 6 such ion-dipole interactions (and there is also aquation of the negative ion to give ), dissolution in water is thermodynamically feasible. The formation of 6 such ion-dipole bonds is almost precisely equal to the lattice enthalpy of solid sodium chloride, and the reaction is readily reversible. Note that there are many chemical reactions that are reversible.

See all questions in Physical and Chemical Changes