How are we able to treat seawater to turn it into freshwater?

By evaporating the salt, we are able to treat seawater and turn it into fresh water.

The main difference between seawater and freshwater is the salt content and different bacteria types. By using a distillation method, we are able to remove the salt and kill the bacteria of the seawater. Distillation is a process through which saltwater is evaporated, which leaves the salt behind, and the water vapor is collected and condensed once more into a liquid. When saltwater is evaporated by heating, the water leaves as steam and leaves the salt content behind. The steam, which contains no salt, is then collected and condensed in a different container. This new water is now freshwater. The bacteria are removed through the boiling of the water, the heat kills off the bacteria. 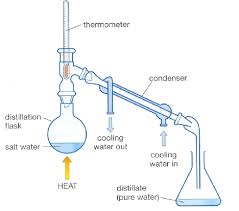 Here is a video of an experiment which uses distillation to purify water from a solution of salt water.

Distillation may seem like the answer to droughts and water crisis, but distillation is a long and expensive process. It would cost more to distill the water, than to find a new freshwater source.

See all questions in Humans and Water Supply

5416 views around the world