Organic molecules are deemed to be constructed from an inert hydrocarbon skeleton onto which functional groups (FGs) are attached or superimposed.

It is only necessary to know about the chemistry of a few generic functions in order to predict the chemical behavior of thousands of real organic chemicals.

The rule is that functions assume their distinct identity when separated by CH2– groups. Thus, the carbonyl, C=O, and hydroxy, OH, of a carboxylic acid, RCOOH, are part of a single function and are NOT "alcohol-plus-ketone":

A multifunctional entity like the drug molecule morphine has several functional groups and chiral centers. 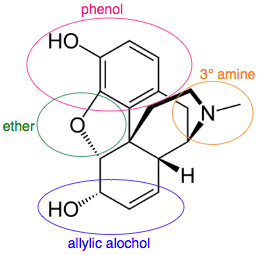 6369 views around the world