How can I create NMR from molecules?

WARNING! This is a long answer!

"Creating" a carbon-13 NMR is too difficult without experimental data, in my experience.

However, we can indeed "create" a proton NMR for molecules, but it's hard to be accurate. We can estimate locations and predict splitting, but we should also look it up to check.

These days we have computational methods to predict these spectra, so there is no need to guess by hand anymore.

Suppose we wanted to create NMR spectra for isobutanol. 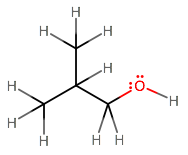 Using the concepts of neighboring protons and literature values, we can generate a proton NMR for this molecule. First, we need to know the following chemical shifts:

Labeling the molecule for unique protons, we get: 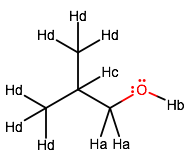 Reasoning for relative positions of peaks

Hydroxyl Proton (B)
The OH peak (proton B) is a singlet to begin with, but it may overlap with something else. Hard to tell where it will be, but maybe ?

Methylene Protons (A)
Looking at protons A, they have one neighboring proton C, so it will be a medium-intensity doublet. It is closest to the OH, thus its chemical shift is the most downfield due to strongest electron withdrawal effects.

Tertiary Proton (C)
Looking at proton C, it has eight neighbors, one three-proton group of which is identical. So, I would expect a sextet splitting (six peaks), or perhaps a quintet splitting, depending on the extent. This is heavily split, and the more splitting, the weaker the peaks, so this should be very weak. This is in the presence of OH and is second-most closest in the structural position. Thus it is less downfield than protons A.

Methyl Sidechain Protons (D)
Looking at protons D, they each have one neighboring proton C, so it will be a strong doublet (two identical s makes for overlapping peak(s)). Both are in the presence of OH, but equidistant from it, so there is no difference in chemical shift between each identical protons D. These are least downfield because they are farthest away in position from OH.

As a result, I would expect:

Overall, from left to right in the NMR, I would expect the proton peak order to be roughly one of these (* emphasizes it's the OH):

The actual spectrum is: 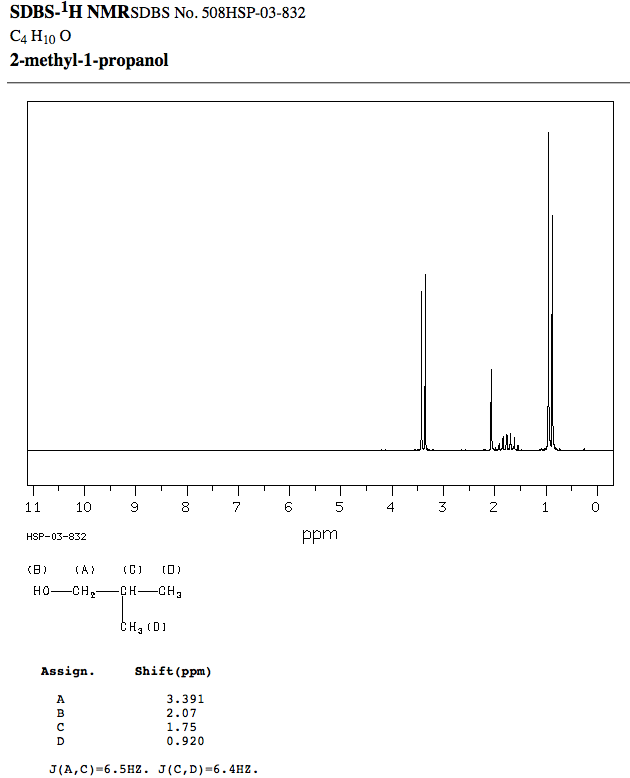 That means possibility 3 was correct.

As you could probably tell, it was hard to predict exactly how it looks. It's possible to get a good guess though as to what the peaks look like and where they are relative to each other, more or less, and that's what I did.

See all questions in Molecules to NMR