How can I read a band of stability graph?

The band of stability graph shows how protons and neutrons stick together to form stable combinations in the nucleus.

The nucleus of an atom is made up of protons and neutrons. These have to be kept in careful balance - one small change and the nucleus could simply blow apart. It's not really meant to be together anyway. Positive protons shouldn't be so close to other positive protons. Its a knife edge; a small push could completely upset the precise harmony of the nucleus and set off everything exploding.

The band of stability graph has the number of neutrons on one axis and the number of protons on the other, and it shows you where the knife edge is. Which combinations are stable, and which aren't.

It is a roughly constant upwards trend - more protons mean you need more neutrons for it to stick together. You don't supply the neutrons or the protons right and you'll throw the nucleus wildly off balance. 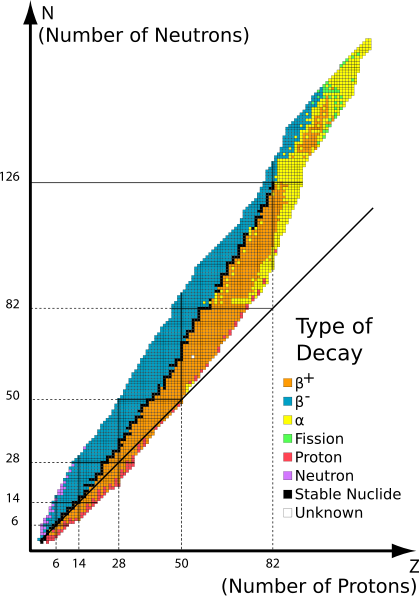 The black squared line in the middle of this graph is where the nucleus is actually stable. Everywhere else is coloured, and the key at the bottom shows you exactly how that nucleus falls apart. After a certain point, at protons, there are simply too many for anything to be stable any more, and nuclei past that point just decay.

It is important to note that you actually need more than one neutron for every proton for the nucleus to stabilise. You will notice the straight line - that shows when the number of protons is the same as neutrons. At the beginning it works and the nuclei are stable. Half way through you start needing more neutrons to stick the mass together, and so the band of stability veers off. Eventually you need neutrons to stick together only protons.

You read it like any other graph: given a number of protons, you can find out how many neutrons you need to keep that stable by tracing your finger up. Given neutrons, you can find how many protons you'd find in a stable molecule that size by tracing across. The colours show the unstable nuclei, and the precise colour tells you how that unstable nucleus will fall apart.

See all questions in Isotope Stability

7794 views around the world