How can you tell the rate determining step?

When you first learn about it in high school, it is often just told to you which step is the slow (rate-limiting/rate-determining) step.

If you want to guess at which step it is, we assume you know the mechanism already. Often, the slow step is the step that is least favorable, so it takes a while for the fairly unstable intermediate to form before it gets propelled to form the product(s).

An example is the mechanism on tert-butyl bromide, where bromide () departs as a leaving group, and then a slow/poor nucleophile attacks the planar carbocation. 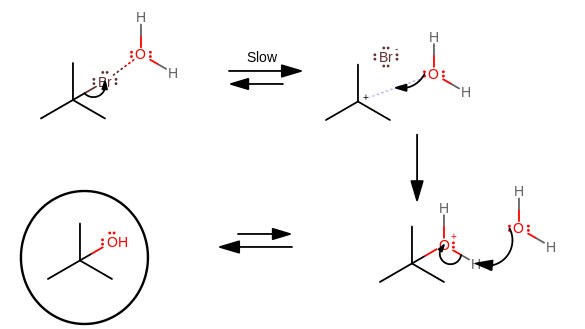 Attacking the carbocation is faster than forming it, because:

Therefore, this is the slow step.

Therefore, this is a faster step.

4799 views around the world