How do electron capture detectors work?

Suppose we had a gas chromatograph that sent its output stream of carrier gas (the mobile phase) through the column labeled below: 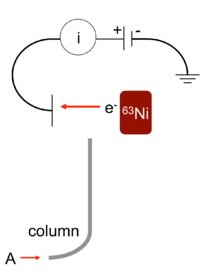 Typically, about (a measure of radioactivity, called "Curies" after Marie Curie; is a millicurie) of the radioactive nuclide acts as an electron emitter.

This emits radioactive electrons in the presence of, typically, , which acts as a makeup gas (a gas that is used to minimize band broadening, which tends to be an issue, for instance, if you're working with many molecules with diverse root-mean-square velocities [doppler broadening]).

As the electron emitter emits electrons at the makeup gas, these electrons collide with them and ionize them, thus increasing the number of free electrons.

The free electrons travel through towards a positively-charged anode, creating a circuit. This generates the background signal. This set of electrons is then accelerated into the electron capture detector which counts electrons as it absorbs them.

It then converts the signal (like a transducer) in such a way that you get the analyte concentration.

7631 views around the world