How does mutation affect transcription?

Some mutations seem to not cause any problems but others are like a train wreck. The protein that should have been formed is unusable.

Some well-known inherited genetic disorders include cystic fibrosis, sickle cell anemia, Tay-Sachs disease, phenylketonuria and color-blindness, among many others.

All of these disorders are caused by the mutation of a single gene.

One form of mutation is a point mutation, in which a single base is changed. This will therefore change one base in the resulting mRNA strand.

Depending on what the change is it could have different effect on the resulting amino acid.

Nonesense mutations can lead to truncated polypeptides, destroying protein function. A missense mutation will change the amino acid sequence. This may alter the function of the protein, usually negatively, but sometimes positively. This later case may be favored by evolution, as the change is heritable. 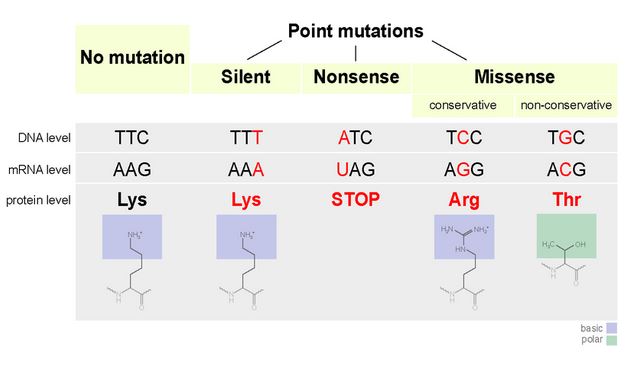