How does the atmosphere protect us from ultraviolet rays?

The answer is ozone layer.

The ozone layer or ozone shield refers to a region of Earth's stratosphere that absorbs most of the Sun's ultraviolet (UV) radiation.

It contains high concentrations of ozone (). It is a pale blue gas with a distinctively pungent smell. It is an allotrope of oxygen that is much less stable than the diatomic allotrope. Ozone is formed from dioxygen by the action of ultraviolet light and also atmospheric electrical discharges, and is present in low concentrations throughout the Earth's atmosphere. 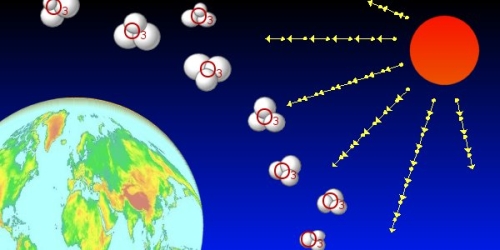 Although the concentration of the ozone in the ozone layer is very small, it is vitally important to life because it absorbs biologically harmful ultraviolet radiation coming from the sun. UV-C , which is very harmful to all living things, is entirely screened out by a combination of dioxygen (< 200 nm) and ozone (> about 200 nm) by around 35 kilometres altitude. UV light is also important, for example UV-B. Some UV-B, particularly at its longest wavelengths, reaches the surface, and is important for the skin's production of vitamin D. 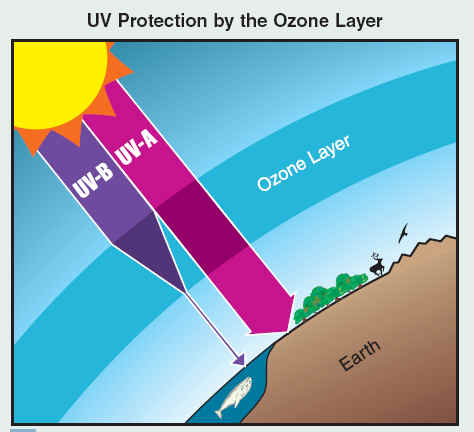 Ozone is transparent to most UV-A, so most of this longer-wavelength UV radiation reaches the surface, and it constitutes most of the UV reaching the Earth. This type of UV radiation is significantly less harmful to DNA, although it may still potentially cause physical damage, premature aging of the skin,...