How is DNA anti-parallel?

DNA is double stranded, and the strands are antiparallel because they run in opposite directions.

Each DNA molecule has two strands of nucleotides. Each strand has sugar phosphate backbone, but the orientation of the sugar molecule is opposite in the two strands.

Both of the strands of DNA double helix can grow in 5' to 3' direction, but they grow in opposite directions due to opposite orientation of the sugar molecule in them.

The antiparallel orientation allows for the base pairs to compliment one another. Antiparallel DNA is also more structurally stable than parallel DNA. 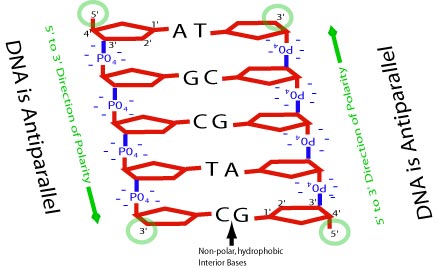 The antiparallel orientation of DNA has important implications for DNA replication, as at the replication fork one strand allows steady replication, thereby known as leading strand while the other becomes lagging strand.

See all questions in DNA Profiling