How many different chemical reactions can a single enzyme catalyze?

More often than not, it's safe to assume that a single enzyme tends to catalyze just one reaction, or a set of closely-related reactions.

(We, as outside observers, can thus tell after-the-fact that many enzymes---though not all of them---are typically named for how they act.)

This is due to:

Substrates can bind/complex to particular enzymes, causing a structural change in the enzyme. Stuff happens at the active site, and the product is made.

You can read further for an example.

GAPDH, THE ENZYME THAT ALLOWS FOR A NET GAIN IN ATP THROUGH GLYCOLYSIS

As an example, let us consider GAPDH, glyceraldehyde-3-phosphate dehydrogenase, an important enzyme that participates in glycolysis and gives it a net gain in ATP.

As its name suggests, it targets glyceraldehyde-3-phosphate (GAP). What might be less intuitive is that in the end, it works with NAD+ or NADH when catalyzing the transfer of a hydride group () onto or off of the GAP substrate.

Essentially, the forward reaction from GAP to 1,3-BPG is: 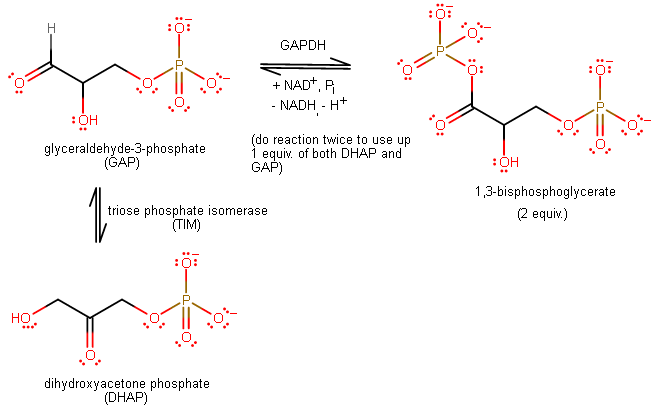 where DHAP equilibrates to form a second equivalent of GAP, pushing the GAPDH equilibrium forward via Le Chatelier's principle. That's why you get two equivalents of 1,3-bisphosphoglycerate (1,3-BPG), not one.

THIS ENZYME IS USED IN BOTH DIRECTIONS FOR THIS METABOLIC STEP

As you should expect from the equilibrium arrow, this reaction can also go backwards during a process called gluconeogenesis (making new glucose from nothing), and the same enzyme, GAPDH, is also used for the reverse direction of the same reaction step.

So, we should note that GAPDH is used in both glycolysis AND gluconeogenesis.

WHAT IF WE DIDN'T HAVE GAPDH?

If we didn't have this one enzyme, we wouldn't be able to perform glycolysis past this step, which would likely lead to high blood sugar (hyperglycemia) since there would be a buildup of GAP, causing a chain of product inhibitions for previous steps in glycolysis, inhibiting aldolase, phosphofructokinase (PFK-1), phosphoglucose isomerase (PGI), and then hexokinase (HK), ultimately causing a buildup of glucose.

The take-home message? The implication that this enzyme is extremely important! Why?

Because it's the only one in human beings ever, that performs this step in glycolysis. It only works for this reaction.

7608 views around the world